I had a blast catching up with a quiet little webcomic called Silent Pirate, and was inspired in the last panel to create some fan art - and this would be the first time I'd ever have a chance to actually share the work with the creator, which is cool. (All my Jurassic Park stuff never had a chance to go to Stan Winston, though his website and school of character arts might mean it's possible to meet him?)


I've also got a snippit to include from my "sketchbook" of material.

Nothing fancy, but here's a dinosaur on a globe I drew while at work a few months ago, while humouring the boss's son. Luckily we were both more interested in doodling than whatever else we were supposed to be doing. We therefore had a competition to draw a globe the best, and I drew a dinosaur on mine as well, claiming the title as the undisputed champion of the exercise. 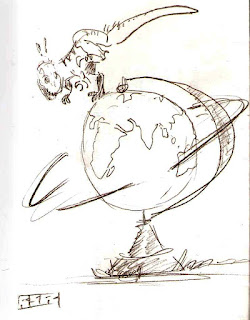